dash.testing 🧪 provides some off-the-rack
pytest fixtures
and a minimal set of testing APIs with our internal crafted
best practices at the integration level.

This tutorial does not intend to cover the usage of
pytest and
Selenium WebDriver,
but focuses on how to do a simple integration test with Dash by hosting
the App server locally and using a Selenium WebDriver to simulate
the interaction inside a web browser.

The Dash testing is now part of the main Dash package. After
pip install dash[testing], the Dash pytest fixtures are available, you
just need to install the WebDrivers or use a remote Selenium-Grid and you
are ready to test.

FYI, We run Dash integration tests with Chrome WebDriver.
But the fixture allows you to choose another browser from the command line,
e.g. pytest --webdriver Firefox -k bsly001.

Headless mode is added in Dash 1.0.1, run pytest --headless -k bsly001
to start test in headless mode. First time hearing about headless mode? The
main benefit for us is it’s lighter and faster to run without a UI. You
can check the details from both Firefox
and Chrome.

Remote WebDriver support is added in Dash 1.3.0. There are two ways to use it:

It’s important to note that we cannot fully test and guarantee that the
above cases will work with any given selenium grid you have. The limitation
might come from how the network is set up, the limitation of different
hosting OS or how docker-compose was configured.

You might need to do some auxiliary WebDriver Options tuning to run the
tests in a particular Selenium-Grid. The first useful tip is to change the
default logging level with --log-cli-level DEBUG. Secondly, there is a
back door for browser option customization by a pytest_setup_options hook
defined in plugin.py.

The example below is to use the headless mode with Chrome WebDriver in
Windows, there is a workaround
by adding --disable-gpu in the options.

We released Dash for R
in July 2019. To facilitate testing it, we extended the Python package
dash.testing to support Dash for R apps.

The new dashr fixture gives us a test development experience in
Dash for R that’s nearly identical to the dash_duo fixture in
Dash for Python. In this context, a dashr fixture is an instance of
Python class which provides a reliable framework to execute the app and test
one or more of its features via Selenium WebDriver. For more details,
please visit pytest documentation.

Here is a simple example runnable with pytest. Your Dash App is written
as a string inside the Python test code (the app argument can also be a
valid path to a .R file), the app is then executed by Rscript within
a Python subprocess and we can use the same set of API calls to
test it exactly as we do Dash testing in Python Apps.

To avoid accidental name collision with other pytest plugins, all Dash test
fixtures start with the prefix dash or dashr.

A standalone WebDriver wrapped with high-level Dash testing APIs. This is
suitable for testing a Dash App in a deployed environment (Dash for Python
or R), i.e. when your Dash App is accessible from a URL.

The default fixture for Dash Python integration tests, it contains a
thread_server and a WebDriver wrapped with high-level Dash testing APIs.

Start your Dash App locally in a Python threading.Thread, which is
lighter and faster than a process.

This is close to your production/deployed environment. Start your Dash App
with waitress(by default if raw_command is not provided) in a Python
subprocess. You can control the process runner with two supplemental
arguments. To run the application with alternative deployment options, use
the raw_command argument; to extend the timeout if your application needs
more than the default three seconds to launch, use the start_timeout
argument. Note: You need to configure your PYTHONPATH so that the Dash
app source file is directly importable.

And Dash for R test fixtures have a prefix dashr.

The default fixture for Dash for R integration tests. As dash_duo in Python,
it contains a dashr_server and a Selenium WebDriver with the same Dash
testing APIs.

Start your Dash for R App with Rscript in a python subprocess. Note that
unlike python server fixtures, the start server arguments can only be
configured inside the Dash for R App.

Both dash_duo and dash_br expose the Selenium WebDriver via the
property driver, e.g. dash_duo.driver, which gives you full access to
the Python Selenium API.
(Note that this is not the official Selenium documentation site, but has
somehow become the defacto Python community reference)

One of the core components of selenium testing is finding the
web element with a locator, and performing some actions like click
or send_keys on it, and waiting to verify if the expected state is met
after those actions. The check is considered as an acceptance criterion,
for which you can write in a standard Python assert statement.

There are several strategies to
locate elements;
CSS selector and XPATH are the two most versatile ways. We recommend using
the CSS Selector in most cases due to its
better performance and robustness across browsers.

If you are new to using CSS Selectors, these
SauceLab tips
are a great start. Also, remember that
Chrome Dev Tools Console
is always your good friend and playground. 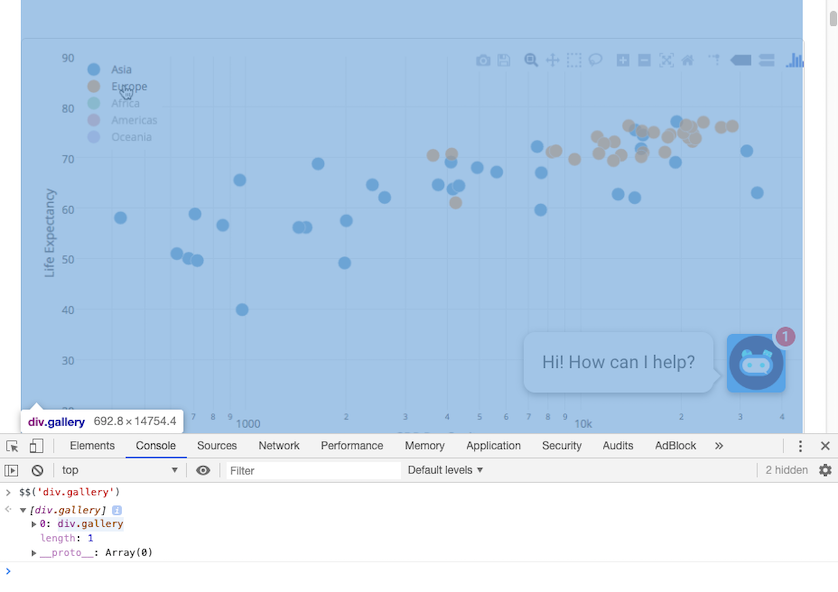 This link covers
this topic nicely. For impatient readers, a quick take away is
quoted as follows:

Note all custom wait conditions are defined in dash.testing.wait
and there are two extra APIs until and until_not which are similar to
the explicit wait with WebDriver, but they are not binding to
WebDriver context, i.e. they abstract a more generic mechanism to
poll and wait for certain condition to happen

This section lists a minimal set of browser testing APIs. They are
convenient shortcuts to Selenium APIs and have been approved in
our daily integration tests.

The following table might grow as we start migrating more legacy tests in
the near future. But we have no intention to build a comprehensive list,
the goal is to make writing Dash tests concise and error-free.
Please feel free to submit a community PR to add any missing ingredient,
we would be happy to accept that if it’s adequate for Dash testing.

This section enumerates a full list of Dash App related properties and APIs
apart from the previous browser ones.

If you run the integration in a virtual environment, make sure you are
getting the latest commit in the master branch from each component, and
that the installed pip versions are correct.

Note: We have some enhancement initiatives tracking in this issue

The CircleCI Local CLI is a
handy tool to execute some jobs locally. It gives you an earlier warning
before even pushing your commits to remote. For example, it’s always
recommended to pass lint and unit tests job first on your local machine. So
we can make sure there are no simple mistakes in the commit.

You can get more logging information from Selenium WebDriver, Flask server,
and our test APIs.

Inside a docker run or VM instance where there is no direct access to the
video card, there is a known limitation that you cannot see anything from
the Selenium browser on your screen. Automation developers use
Xvfb as
a workaround to solve this issue. It enables you to run graphical
applications without a display (e.g., browser tests on a CI server) while
also having the ability to take screenshots.

We implemented an automatic hook at the test report stage, it checks if a
test case failed with a Selenium test fixture. Before tearing down every
instance, it will take a snapshot at the moment where your assertion is
False or having a runtime error. refer to Browser APIs

Note: you can also check the snapshot directly in CircleCI web page
under Artifacts Tab

There are two customized pytest arguments to tune Percy runner: